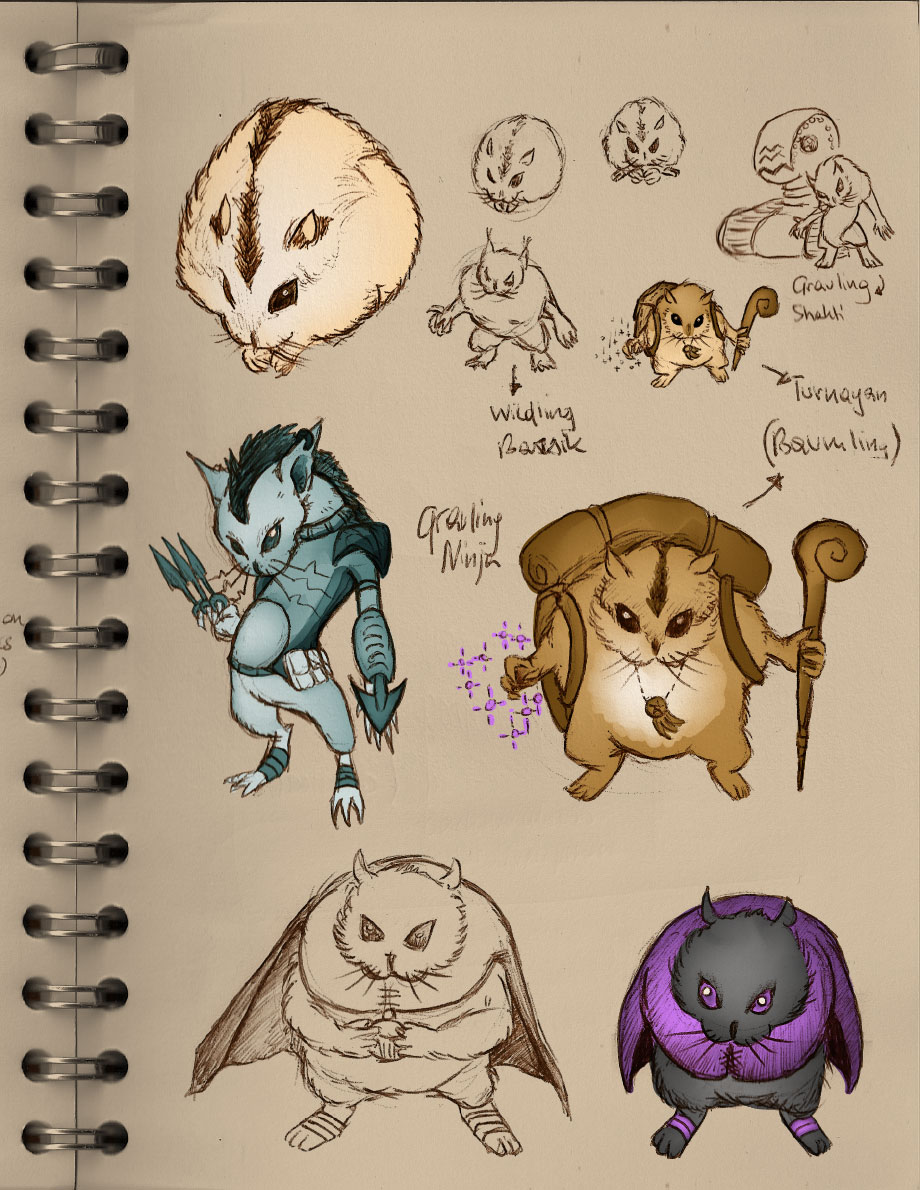 I took some time to gather sketches, scan them and put a little bit of color on them. Just to get my thoughts across.

Player’s pick these little furballs — called Michtims — as their characters. There are three tribes from which you can pick your heritage. They have different ideals and also make use of the same Talents using different themes. The ideals provide potential for conflicts, but I am far from making some tribe ‘the bad guy’ although some look pretty damn mean…

The inhabitants of the sinister Immergrummelwald (always-mumble-woods) were the prototype Michtims. They are very joyful creatures who know how to celebrate. There is a giant festival on nearly every occasion one might deem remotely party-worthy. Turnayans love good food, telling stories to each other, dancing and singing. Oh, and they love magic! Magic is somewhat of a special-effects-party-enhancer to them though.

Ideal: Community. Turnayans deeply care for others of their tribe. This does not mean that fighting does not occur; sometimes it is even demanded. Nevertheless, they know the value of companionship and having a good time.

Theme: Festival Magic. Callings are magical and performative in nature.

Appearance: Stocky. Baumlinge love food and it shows. They often resemble hamsters in their built, looking a lot like balls of fur with short limbs and virtually no necks.

Living in the bowels of Plutopolis (sometimes called Pollutopolis) these creatures are neighbors to humans and rats alike. Some live in vacant buildings, others inhabit sewers. They build stuff out of the rubbish that nobody else wants. Having a knack for technology and a keen interest in progress, they look for opportunities to grow their wealth and build their own magnificent city.

Ideal: Profit. Shakti love technology and progress, but they do it all to increase their profit. To build a fabulous future means to gather enormous amounts of resources. Knowing your price is an important lesson to learn as greyling, and nothing is for free in Plutopolis.

Stereotype: Exploitation. Others think Shakti recklessly pursue their goals and will not care if they will harm nature or society.

Appearance: Wiry. Life in the midst of pollution has left its mark on the greylings. Graulinge resemble weasels in their built. Many also suffer from a complete lack of fur, strange discolorations and other mutations.

This tribe is few in numbers and some even argue whether it should be considered a tribe at all. Barsik lead reclusive lives in the remote mountain wilderness. They have little love for the achievements of ‘civilisation’, instead concentrating their lives on the protection of the wilderness. This kinship with nature allows them to ask animals for assistance in times of need. Keeping their territory safe and taking care of young beasts is of vital importance to them.

Ideal: Nature. Barsik revere the wild and commune with animals. Keeping the environment safe and clean.

Stereotype: Backwardness. Others think Barsik are primitive and boorish.

Appearance: Muscular. Running with beasts has some benefits. Wildlinge are often larger than their relatives from other tribes. Fur is often unkempt and adorned with bones, bark and other natural objects. They most closely look like downsized wolverines.