Well, this is not about D&D, although I found it pretty tempting to use that kind of acronym.

In most RPGs there is a big need to track Hit-/Health-Points or Damage Levels. There are some pretty interesting systems out there beyond vanilla “Hitpoints below 0, you’re dead!” In case of Michtim RPG I want to go a different route altogether.

Death in other RPGs is very often the result of having your Health-Points reduced to below 1. If your team mates don’t manage to save you from the horrible fate of bleeding-to-almost-certain-doom, you can go and tear up that character sheet. Say bye-bye to your beloved Hero! What if death is not a system-wrought certainty, but is left to the players and GMs to decide? Finding a dramatic moment for a heroic departure might be much more interesting after all. I’m certainly not saying systems with a fixed line saying “Now you’re dead!” are flawed; I just want to explore rules that are all about defeating opposition instead of killing it outright.

Defeat in Michtim RPG: When the characters Wound tolerance (~Hitpoints) is reached, they pass out. While KOed, heroes can only use the Weep action. This will help friends cure the defeated character. If all party members are defeated, the GM will look up the appropriate section (of the adventure material) detailing what the foes will do to the group. In the setting of the Michtim RPG death is not the usual punishment; it is much more likely to be dragged away to serve endless shifts in a Bočične Bakery. In any case, GMs are encouraged and supported to find non-fatal means to resolving conflicts.

Damage and Wound Mechanics
Now lets get to some crunch here. The way damage is handled in Michtim RPG is non-linear. Characters get a 2-point Wound, a 3-point Wound and two 1-point Wounds. This amounts to 7 points of Wounds. This total is used to find out if a character passes out. For now, let’s assume this happens if the character accumulates more than 10 Wound-Points. Healers can remove individual Wounds, if they can pull off their Cure rolls.

To track Wounds, players use cards showing the Wound’s rating. We’ll be talking about the text some more later-on. The idea is to stack them on top of each other. A healer can remove a Wound from the target, and you do not have to erase a hole into your character sheet. 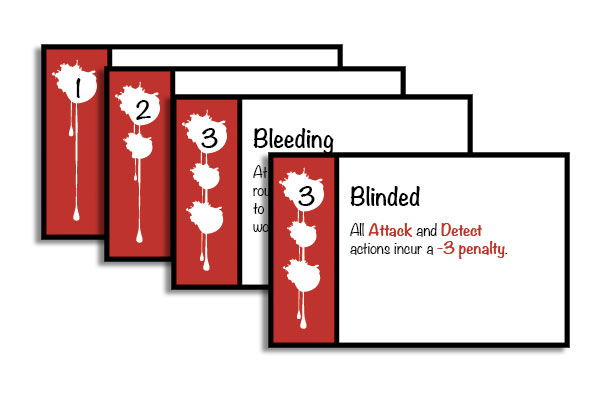 If a player rolls 3 effect on their Attack, they can choose what types of Wounds they want to inflict. They can deal three 1-point-Wounds or a single 3-point-Wound. Healers can only remove a single Wound every round; and they need to beat the individual Wound’s point value. This interaction creates two basic strategies:

Now strategy #2 is more powerful. Even if someone is able to heal up 1-point-Wounds all the time, they have to spend their Action on it. Healing becomes somewhat less valuable, if there are no Deep Wounds (=high rating) to heal. So here’s a little twist, to make them more valuable.

Deep Wound Debuffs!
Deep Wounds (worth 3 points) all have a special debuff mechanic attached. As long as the Wound stays in play, it has a problematic effect for the victim. It can penalize rolls, make targets suffer ongoing damage or reduce the effect of healing.

Most importantly, it can introduce new depth to Weapon selection: A Barsik Lance could freeze enemies to the ground, reducing their ability to Evade, a spell from a Shakti Tome could weaken the power of enemy Attacks.

Do you have any experience with using cards to mark damage?