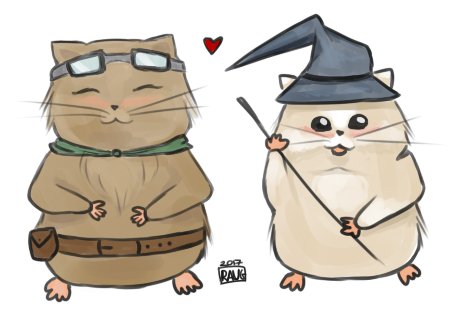 This adventure is ideal to start off a new round playing Michtim with people that have no experience with the game’s rules. Everyone starts as Fauchschule kids (meaning they only fill in their personality dice on the Character sheet or pick an Archetype Card from the Personality deck. Have fun!

Your help is greatly appreciated! Hope you enjoy this!

The Kids are friends who meet at the Festival Plaza, high up in the district of Brightleaf. When everyone got his chance to describe their characters, the Festival starts off with a very short welcome from Cornelius Funkenflug.

“I welcome all of you on this beautiful day. Let’s see who makes the best bocicne and will receive this year’s Festival medals. Good luck and have fun!”

When the kids don’t know what to do, Thekla Leckertopf walks up to them with a musty old Tome of Recipes and says she will help them bake something delicious. All she needs are ingredients and the kids should fetch them. These ingredients can all be found close to the Festival area.

Note: When the players understand the basics, you can directly proceed to the next adventure: The Stolen Tome. (To be continued)

There is a bee hive close to the festival grounds. Bees are of course on good terms with Michtims, but have to be persuaded to give up their honey. Also they will likely require the Michtims to offer them sugarwater as substitute.

In Highgarden district, which is neighboring to the Festival grounds, there is an assortment of bonsai fruit and nut trees and bushes to be found. These are all minituarized versions of regular fruits, but they are very intense in taste.

The only problem is that the Highgarden district is guarded by Goldzahn corps drones. The company has somehow acquired an exclusive license. Something is fishy about that though, as usually all districts are open to every citizen of Turnaya.

On a lower branch of Turnaya there is a small farm of mene-chickens (that means, miniaturized chickens). The farm is tended to by Hubertus Freiland, but he has somehow stepped on a splinter. The kids will have to tend to his wounds and he will be very grateful to share many eggs with them.

When they acquire many ingredients, Thekla will help them bake tasty bocicne. She will open the the Tome of Recipes, many of which she has collected over the last decades.

The next steps depend on whether this introductory adventure is played on its own or used as a prelude for the Grownup Adventure “The Stolen Tome”.

The bocicne are extremely tasty and garner lots of applause by the jury. The kids all win a Festival Medal, which allows them to reroll anytime they fail in a cooking challenge.

When the Kids come back, they find Thekla, who has been waiting for them. The Tome of Recipes is lying on top of a desk close by. A shadowy paw extends from a bush and grabs the Tome. The Kids want to react, but the shadow is already gone and a sinister laugh can be heard, as the sound of a minituarized helicopter engine starts to blare.