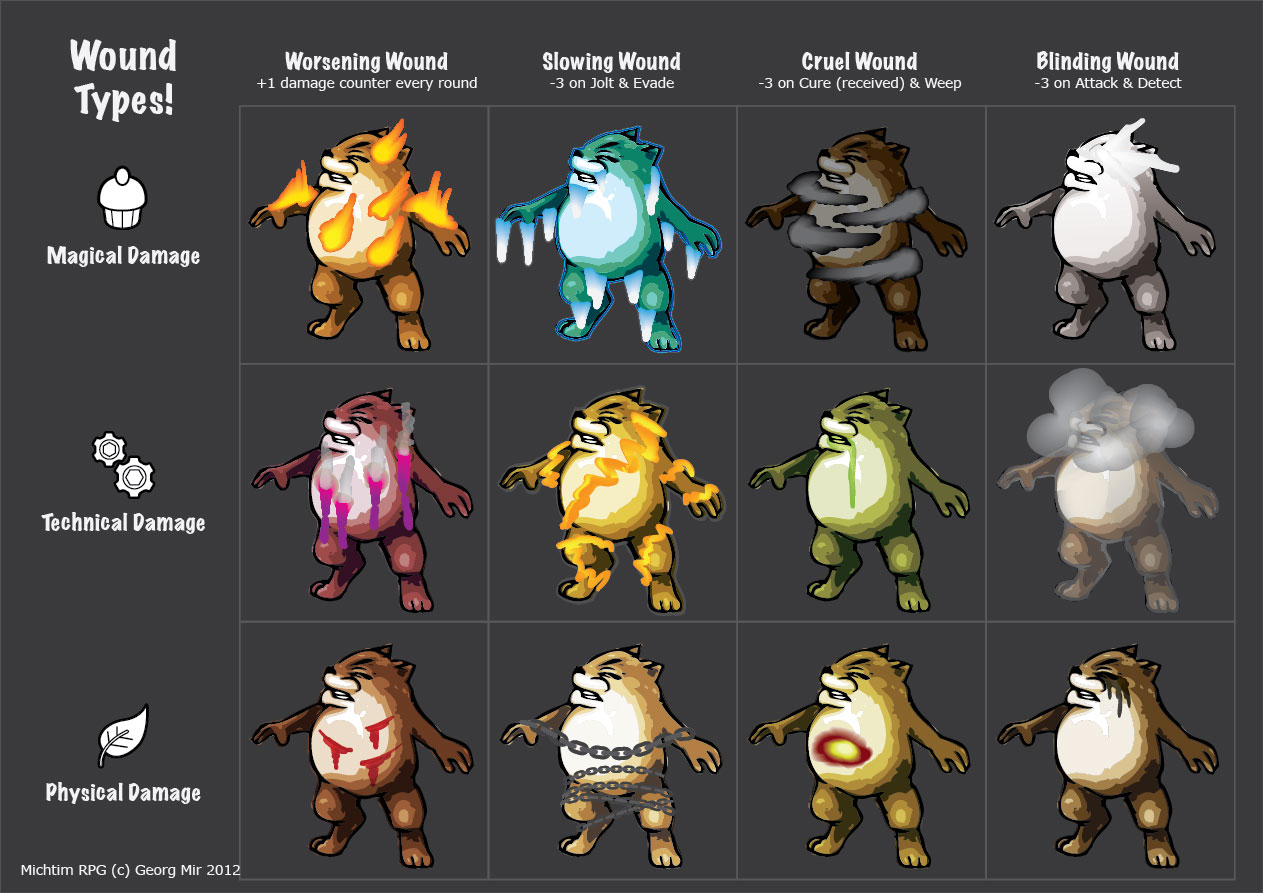 Many games use hit points to track the sustained damage. Reducing those will bring heroines and heroes closer to death’s door. Besides this obvious meaning, there is usually no further mechanic attached to those wounds. Some games use Critical Damage to provide graphic detail in combats (like Dark Heresy and similar Warhammer 40K RPGs). Michtim RPG has a different way of dealing with damage and tries a more visual approach.

Michtim RPG uses pokerchips to track injuries. Each Wound Token is worth one damage. Players keep track of individual wounds, having multiple stacks of those tokens. The higher the stack, the harder healing will be. To incentivize heavy hitting, Deep Wounds always have a debuffing effect on the victim (see Rethinking Damage & Death).

The graphic above shows four types of injuries: Worsening Wounds, Slowing Wounds, Cruel Wounds and Blinding Wounds. It also shows the different kinds of damage: Magical, Technical and Physical. Each tribe favors one of those, as indicated by the tribal icons. The illustrations are both used on Enhancement Cards and Wound Tokens, to indicate special effects.

Triggers require a certain combination of dice. If it comes up, the player may deal the triggered effect to the victim; even if it is not a Deep Wound. Every faction uses different triggers, so a Michtim looking to maximize her chances to get those effects needs to gain reputation with other tribes.

Trigger Combinations for each Tribe

Example: This means you can ideally get an Artificer to bind a Frost Spirit into your blade (Slow on 1+6), get a Tinkerer to install a Lightning Emitter (Slow on 2+5) and ask an Artisan to attach a Binding Chain (Slow on 3+4) to the same blade. In addition to all those goodies, the blade deals a Bleeding Wound (Worsening Wound) on 3 hits, as per the default Deep Wound rules.

Let me know what you think! 🙂