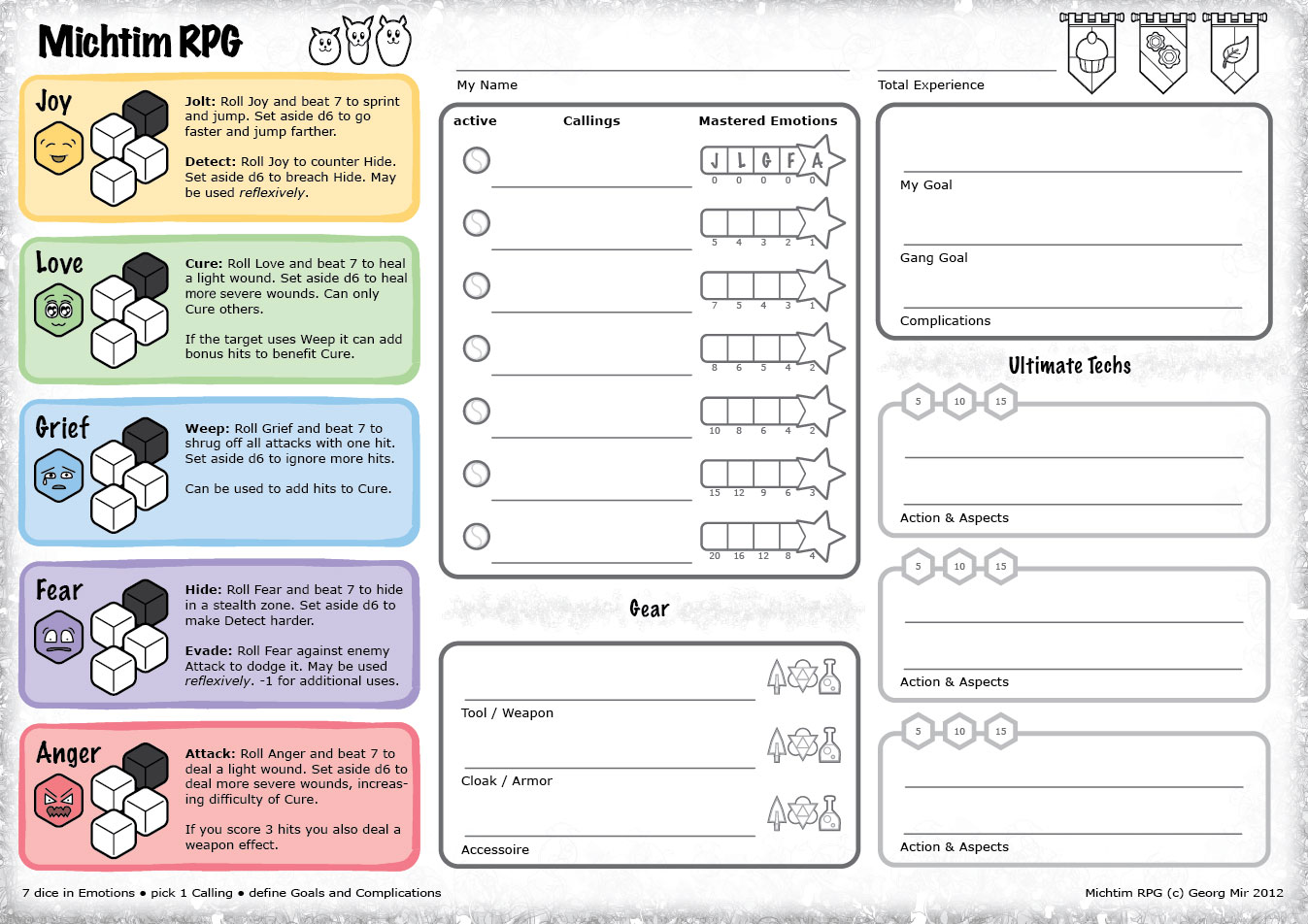 EDIT: Here’s the updated character sheet (Deutschsprachiger Charakterbogen). The graphic design of the Calling section signifies that mastering all Emotional aspects of a Calling is special. Usually players will not invest all their points into a single Calling, because all they need is unlocking those aspects they have the highest Emotion rating in. Mastery is required in case you want to specialize (attuning only a single aspect, so you can bring more different Callings to the table). Also there is a Gear section on the character sheet now. Previously I was relying on gear cards, but that does not always come in handy.

The first round of play testing has been conducted yesterday. It was a blast! I had enormous amounts of fun, giving other people a first walk through the Immergrummelwoods and the Long-Legger’s City. Several of the changes increase the Cook’s power, while other alterations are used to simplify the game for new players.

Cook Preparation & Machinist Building time reduced drastically. Instead of setting aside one die per round, the whole procedure now only takes a single round. Gang members would already be in melee by the time you would have set up your booth; so the value of Cooking was highly reduced.

Cook’s Love dish may now be used to heal yourself (even the cook). Usually the Cure action is restricted to only heal others. The Cook’s Love dish circumvents this limitation, and works very similar to a healing potion. If it is used to Cure someone else, the dish’s rating is added to the beneficiary’s Love rating (as mentioned above). If you want to ingest the healing dish yourself, you have to rely on the dish’s rating alone! Your Love rating is not added to heal yourself!

Wound Effects can only be applied one time. Pretty obvious situation: if you suffer a single Bleeding Wound this can end the fight quickly. Previously you could suffer more than one Bleeding Wound, which could lead to extreme amounts of Damage-over-Time! Currently I’m exploring the limited approach. Maybe I will change the mechanic only for Bleed effects.

Players have three Calling Slots from the beginning. Previously players had to buy each individual Aspect of a Calling Slot. This would also add a lot of complications in the early game.

Equipping Aspects (instead of Callings) is now an Advanced Rule. This was highly complicated before, taking a lot of explanation to get the point across. Other games have fixed abilities: you are a Fighter for your whole career and may add other classes on top. In Michtim RPG you unlock new Callings, but you can only use a limited number at a single time. This allows players to switch their character concept around. The added flexibility was daunting to inexperienced players though. It took about 20 minutes to finally get the concept into their heads. This was a clear waking call for me.

UPDATE: This part of character design will be treated as an Advanced Rule from now on, being only available to players who intend to get the most out of their character, and who are willing to spend some time on the details. Usually players will only worry about the Callings:

The player eschews the flexibility of building all sorts of machines (Machinist calling). Instead she now combines the Devastator Aspect with the Stim-Injector Aspect. To do so, the player needs to master both the Machinist and Apothecary callings first though. Mastery means learning all Aspects of the Calling, although only one is attuned.